No Merchandising. Editorial Use Only. No Book Cover Usage. Mandatory Credit: Photo by Moviestore/REX Shutterstock (1609927a) Roger Moore Film and Television 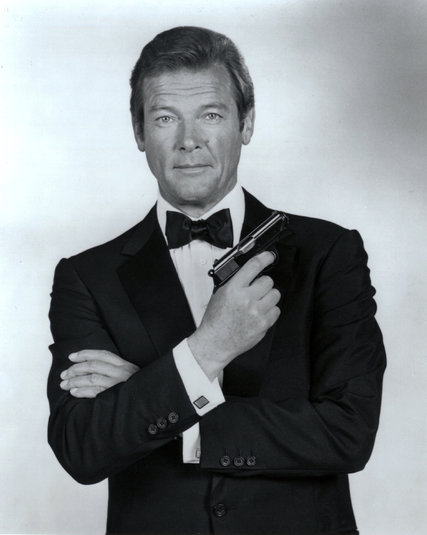 Roger Moore, the dapper British actor who brought tongue-in-cheek humor to the James Bond persona in seven films, eclipsing his television career, which had included starring roles in at least five series, died on Tuesday in Switzerland. He was 89.

The death, attributed to cancer, was confirmed in a family statement on Twitter. It did not say where in Switzerland he died.

Mr. Moore was the oldest Bond ever hired for films in the canon, taking on the role when he was 46. (Sean Connery, who originated the film character and with whom Mr. Moore was constantly compared, was 33, although in the spoof “Casino Royale,” David Niven was in his 50s.) Mr. Moore also had the longest run in the role, beginning in 1973 with “Live and Let Die” and winding up in 1985 with “A View to a Kill.”

When he became 007, the author Ian Fleming’s sexy secret agent with a license to kill, Mr. Moore was already well known to American audiences. After playing the title role in a British medieval-adventure series, “Ivanhoe,” shown in the United States in syndication in 1958, and starring in “The Alaskans,” a short-lived (1959-60) ABC gold-rush series, he replaced the departing James Garner in the fourth season (1960-61) of the western hit “Maverick.” His decidedly non-Western accent was explained away by the British education of his character, Beauregard Maverick, the original hero’s cousin.

From 1962 to 1969 Mr. Moore was Simon Templar, the title character of “The Saint,” a wildly popular British series about an adventurous, smooth-talking thief. It did so well in syndication in America that NBC adopted it for its prime-time schedule from 1967 to 1969. Two years later, Mr. Moore and Tony Curtis starred in ABC’s one-season series “The Persuaders” as playboy partners solving glamorous European crimes. 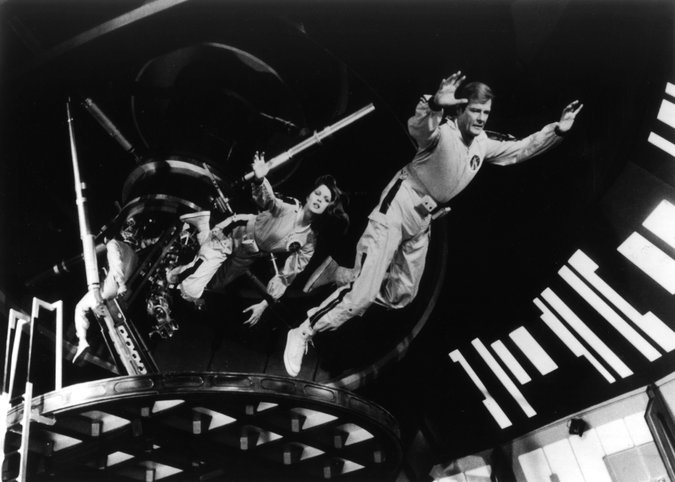 After surrendering the Bond role to Timothy Dalton, Mr. Moore appeared in a half-dozen largely unexceptional movies, made a few television appearances and did voice work in animated films. Mostly, however, he turned his attention elsewhere, becoming a Unicef good-will ambassador in 1991. He was made a Commander of the British Empire in 1999 and was knighted in 2003.

Roger George Moore was born on Oct. 14, 1927, in Stockwell, South London, the only child of George Alfred Moore, a London police officer who dabbled in amateur theater, and the former Lily Pope. Early on Roger expressed interest in becoming a commercial artist and worked while a teenager at an animation company. But he fell into movie extra work, was encouraged by a director to pursue acting and entered the Royal Academy of Dramatic Art in 1944.

He was drafted during the final year of World War II, serving as a second lieutenant in the Royal Army Service Corps. After the war he did stage work in London and Cambridge, England, and appeared in mostly uncredited movie parts. He left for the United States in 1953.

Mr. Moore made his American television debut that year playing a French diplomat on an episode of NBC’s “Robert Montgomery Presents.” His film debut was a small role as a tennis pro in “The Last Time I Saw Paris” (1954), starring a young Elizabeth Taylor. His second movie was the romantic melodrama “Interrupted Melody” (1955), with Eleanor Parker. But he soon returned to Britain and spent the rest of his career doing a mix of British, American and European projects.

During his tenure as James Bond, Mr. Moore played almost a score of unrelated acting roles, most notably “The Cannonball Run” (1981), the car-race comedy with Burt Reynolds, and the television movie “Sherlock Holmes in New York” (1976), in which he starred as Holmes and John Huston played Professor Moriarty.

Mr. Moore’s only visits to Broadway were brief and, in different ways, unpleasant. In 1953 he had a small role in the British drama “A Pin to See the Peepshow,” which opened and closed on the same night. Exactly 50 years later he appeared as the mystery guest star in Hamish McColl and Sean Foley’s comedy “The Play What I Wrote” and collapsed onstage. He received a pacemaker at a New York hospital the next day. (He was already a 10-year survivor of prostate cancer.) 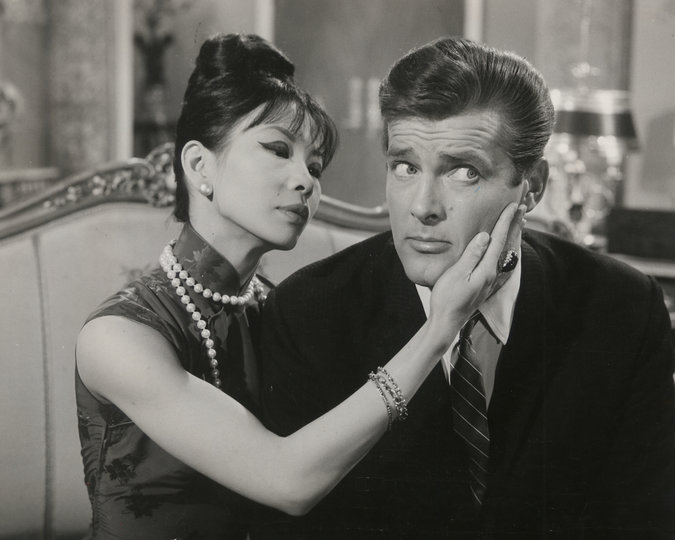 Jacqui Chan and Mr. Moore in “The Saint,” a wildly popular British series about a smooth-talking thief. He played the title character from 1962 to 1969. CreditBBC America

In between, Andrew Lloyd Webber cast him in his 1989 musical, “Aspects of Love,” in London, but Mr. Moore dropped out a month before the opening, unhappy with his singing voice.

His last film appearance was a supporting role in “The Carer” (2016), about an aging and ailing British actor (Brian Cox).

Mr. Moore married four times and was divorced three. He met his first wife (1946-53), Doorn Van Steyn, at acting school in London. He married Dorothy Squires in 1953 and left her in the early ’60s for Luisa Mattioli, whom he had met making an Italian film, but their divorce was not final until 1968. He married Ms. Mattioli the next year and had three children with her. They divorced in 1996, and in 2002 he married the Swedish-born Kristina Tholstrup, who survives him.

He is also survived by his sons, Geoffrey and Christian; a daughter, Deborah; and grandchildren.

Mr. Moore had definite opinions about playing heroic adventurers long before he became Bond. “I would say your average hero has a super ego, an invincible attitude and an overall death wish,” he told The New York Times in 1970. “He’s slightly around the twist, isn’t he?”

“In theatrical terms, I’ve never had a part that demands much of me,” he added. “The only way I’ve had to extend myself has been to carry on charming.”